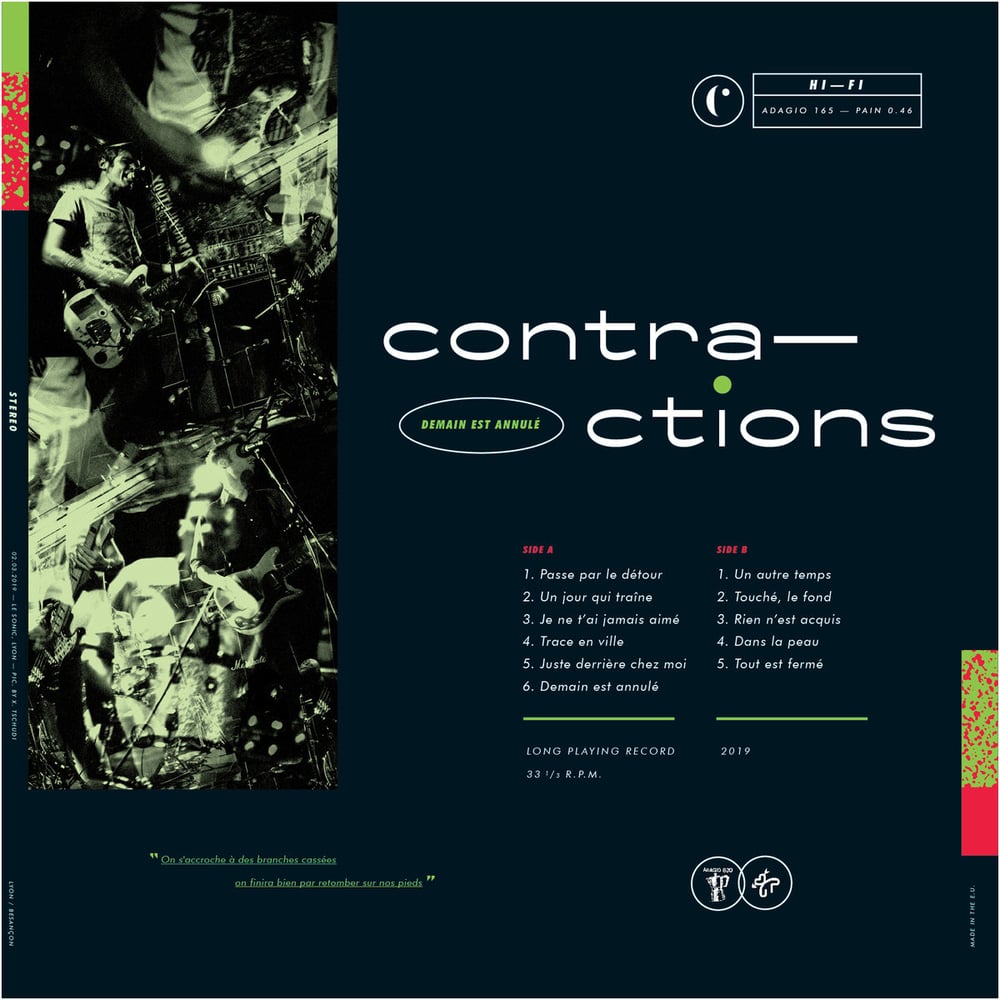 Demain Est Annulé (tomorrow is canceled) is the first album from indie rockers Contractions. Written in Lyon, arranged in Besançon, Demain Est Annulé makes an intimate link between the future and the past of its creators. It sums up their previous experiences with their previous bands (Baton Rouge, Hawaii Samurai, The Irradiates) and brings into the light the massive musical knowledge / experiences they acquired through the years thanks to their involvement in the local indie / punk scene of their hometowns *

This album has been recorded and mixed by Bruno Germain at L'Epicerie Moderne in Lyon, France in the beginning of 2019, then mastered by Mikey Young (Eddy Current Suppression Ring, Total Control) in Melbourne, Australia in may 2019. It got inspired by melodies coming from Kiwi Pop bands + contemporary indie garage bands such as Parquet Courts, The Babies or Reigning Sound, mixed with raw energy inherited from their DIY punk background and a common worship for Hot Snakes and 60s UK/US garage bands.

Contractions though know they won't bring anything new. Because novelty is not really the point here… behind its obvious simplicity, the songwriting is very subtle. Every song has a hook. Arrangements are precise. The melodic vocals are often on the edge of being in tune. Every element of the songs and their recording actually point in the unique direction of looking for the genuine emotion.

There also is in Julien's lyrics this disturbing and familiar sense of realism in the abstraction. They go through personal / intimate topics (Juste Derrière Chez Moi, Un autre Temps, Dans la peau), to this will of staying far from the dominant mass and praising the underground cultures (Passe Par le Detour, Un jour qui traîne). There is also social reflexions about the last riots / social movements in France (Trace En Ville, Demain Est Annulé) and last but not least about sexual assaults in the punk community (Rien n'est Acquis), which is a painful topic to deal with.

* in Besançon Buanax has its own fanzine sine called Slime, Lopin set up shows with its collective Holly Grind, Macst does posters and artworks for bands and in Lyon Julien does Echo Canyon records, a 10+ years old DIY label and does some artworks for people from the punk community as well.